Go into any organisation or ask any employee and we can guarantee that there will be many business processes which can be improved or tasks which can be made easier to complete. Automation and using workflow are critical to ironing out inefficiencies, removing bottlenecks, streamlining tasks and creating new business applications. By replacing paper forms, email trails and spreadsheet-based reports, organisations save time, increase productivity and reduce frustration. Digital workplace teams can even start to reshape the things ways are done and create new opportunities to work better and serve clients.

A combination of Office 365, SharePoint Online and an intranet-in-a-box product like Wizdom provides an excellent digital workplace from which to introduce automation and workflows which will make a real difference to your organisation. Whats most exciting though, is that the options for automation with Office 365 and Wizdom include tools which no longer need to be coded or configured by developers. Instead, power-users and even content editors can create their own simpler workflows, meaning that automation and the benefits that flow from it no longer has to be exclusively delivered via your IT department.

Of course, process automation and workflows have always been possible with SharePoint, but you would generally have needed a resource who was very knowledgeable about SharePoint to be able to implement it for you. Other options would have included using a product like Nintex which some organisations have used successfully, but this comes at an additional cost. Without Nintex or a similar product, generally an average content editor using on-premises SharePoint 2013 would not have been able to produce any significant level of automation on their own without using a central IT resource.

We think this “democratisation” of automation has exciting potential for productivity improvement to reach every part of an organisation, particularly within lines of business and support functions, and individual teams. It can even spark innovation. While we think its still critical to work closely with central IT functions to reduce risk and optimise the configuration of sites, and developers will still need to be involved for complex processes, Office 365 does have the power to deliver tangible efficiencies and inspire a more digital mindset among employees.

Lets look at some of the options for delivering automation using Office 365, SharePoint Online and Wizdom.

Flow is an Office 365 tool that has made workflow and automation much more accessible to non-IT professionals. Flow delivers the power of automation through easy-to-use templates and the ability to build workflow experiences in the browser without leaving a page. For example, a site administrator might have created a list in SharePoint and wants to add some workflow associated with that list, such as adding a notification email if somebody adds an item to the list of a specific value. This can now be done easily within the page just by pointing and clicking.

There are also connectors inside Flow that allow interaction with third party systems. So, for example, you might want to raise a ticket on Jira every time somebody adds something to your SharePoint list or make a request to a third-party API based on some criteria. Before Flow doing that would have been very technical, but now Flow allows content editors and power users to set up their workflows independently. 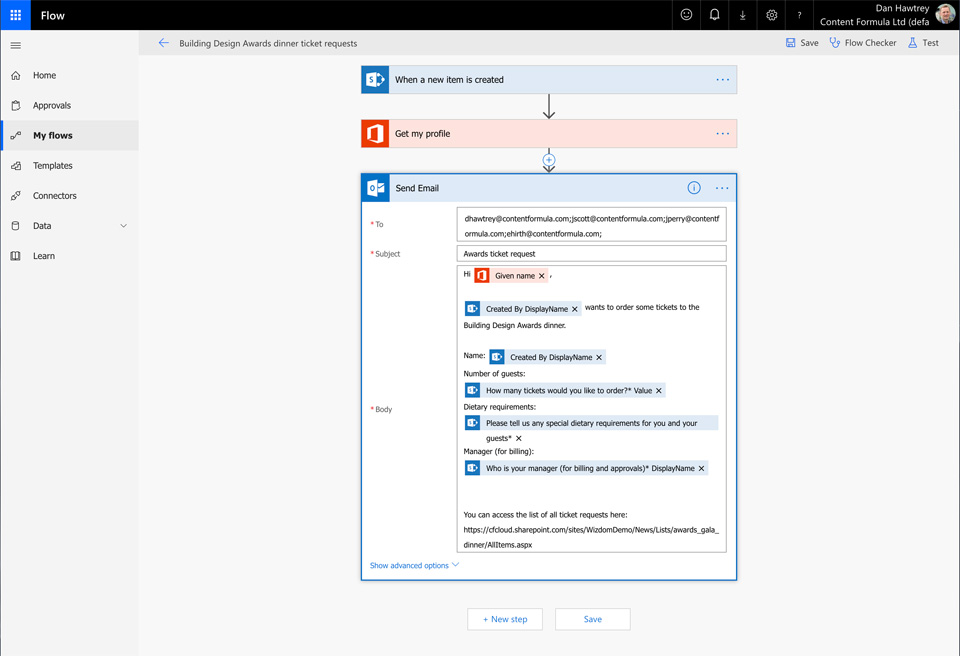 PowerApps is another Office 365 tool which provides another option for automation, as well as the ability to create new experiences for users. PowerApps comes with its own app for mobile devices which can be used by those without an Office 365 license.

If you want to create some automation for a mobile workforce that use their own devices and dont have Office 365 identities, then PowerApps can be used to deliver functionality that will kick start various internal processes. For example, perhaps you want to create various approval workflows for simple business requests such as ordering a new uniform, requesting travel or raising an IT ticket. PowerApps can help you to automate employee requests via a handy mobile app. 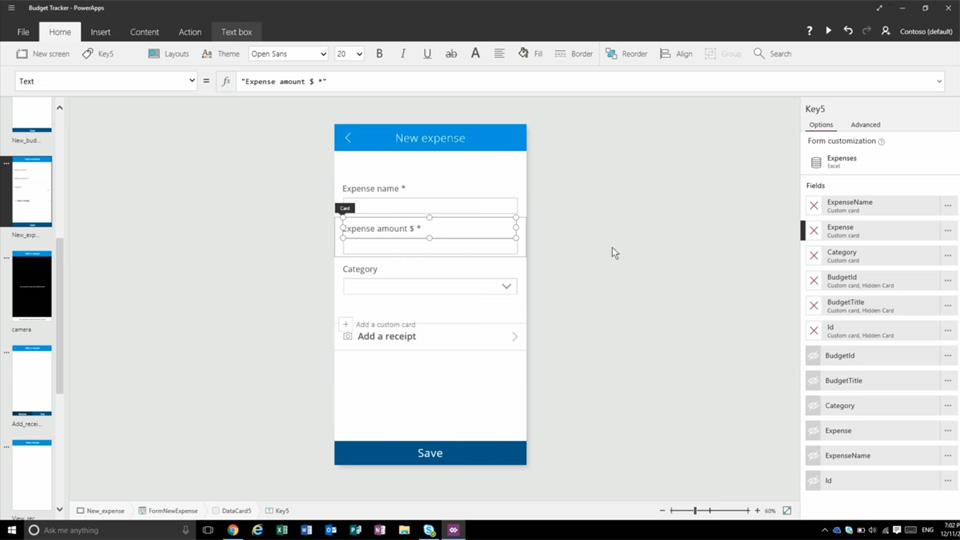 Power BI brings automation to versatile and attractive dashboards which can display the latest statistics, KPIs and other metrics. Because all dashboards update automatically, it means that reporting which previously had to be done manually and was hard to maintain, is now effortless. Power BI is used by everybody from management teams who want a snapshot of the latest company KPIs in real-time to Office 365 teams who want an overview of the adoption of different tools.

Power BI is incredibly powerful because it can pull data from a variety of sources, both within Office 365 but also from external resources. Once trained, power users should be able to create and administer several highly useful dashboards which can be consumed by any user. You can also put in options for different reports to be generated, based on the values of the data flowing in. 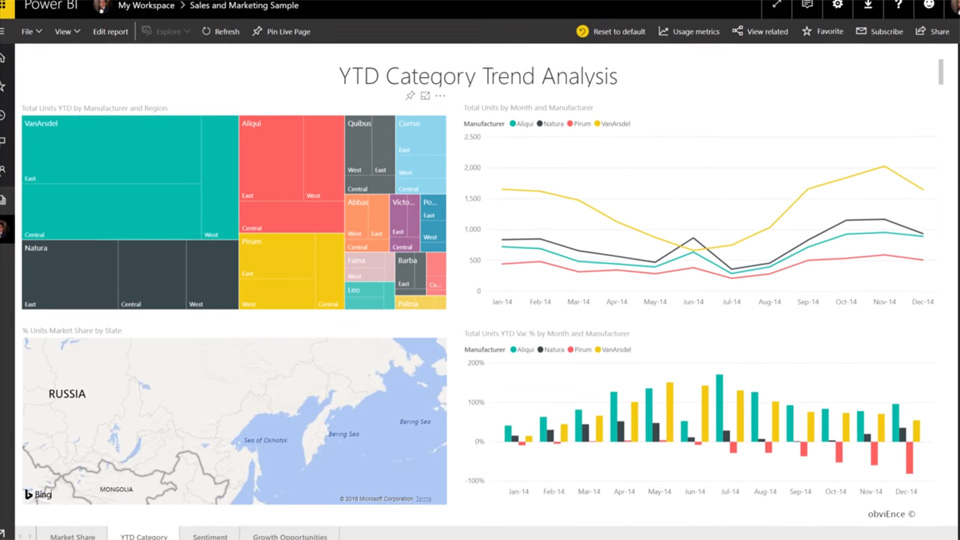 Wizdom provides easy ways for content editors and site administrators to create forms and polls for users to enter information which can then be used to kick off a workflow and deliver an automated process. Lets say a content editor uses Wizdom Forms to easily build a form using drag and drop elements. Because data entered by users in the form can be captured inside a SharePoint list, it then means that list can be combined with Flow or one of the other tools to effectively create a business application. This can be straightforward to configure and end up delivering a powerful solution. A great example might be a form for booking maternity leave which would generate emails and approvals to various people that need to be involved and informed.

A similar approach can combine Wizdom polls with Flow to create workflows. For example, if an IT service was rated by users as poor in a Wizdom poll, you could automatically kick of a workflow to start a follow-up process with that user. 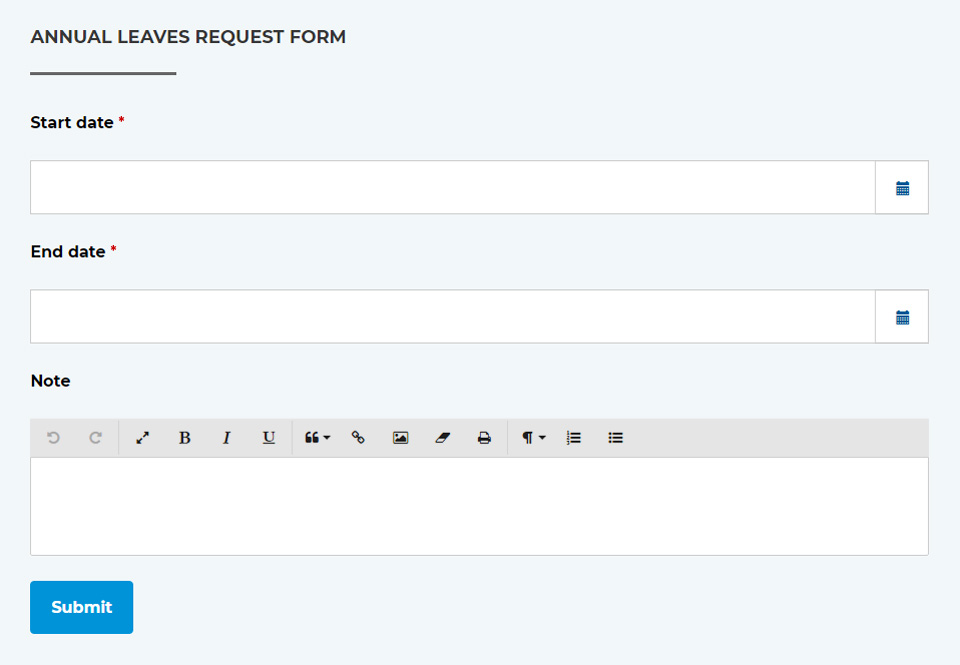 AI is likely to become the way to deliver automation in the future, for example using chatbots as the interface to receive information to kick off workflows, but also to power different automation processes within Office 365. In fact, Wizdom will shortly be implementing some AI-powered automation into its toolset, with the ability for a bot to suggest automatic content tagging for any article as part of the standard publishing workflow. In this case, AI uses language understanding services to make sense of text and match phrases and keywords to a company taxonomy.

We can increasingly see AI as being part of automation, with new tools becoming available for content editors to be able to make meaningful independent configurations which exploit AI.

Before Office 365 if a SharePoint intranet needed any process automation (such as custom staged approvals) an IT professional might use SharePoint Workflows or SharePoint Designer Workflows to build the workflow. Using these tools today is still a valid approach for IT professionals, and there are other options in SharePoint too, but you need to be very savvy with how SharePoint works and be confident to make it succeed. For complex workflows and for less experienced power users who havent received the right training, initially speaking to your IT function or implementation partner is always the best first step.

Automation and workflow are no longer specialist activities for central IT functions. Office 365 and tools like Wizdom are unlocking the potential to set up simple automation for power-users and even content editors. We think thats going to have a beneficial impact on organisations, not only in terms of making efficiency a habit, but also in creating a more digitally-confident workforce.

With several options, including Flow, Forms, Power BI and PowerApps, and with AI creating opportunities in the future, any organisation not currently considering automation-at-scale may be missing a trick. If youd like to discuss automation, workflow and improving processes using Office 365, SharePoint and Wizdom then get in touch!