Even when they bring out life-changing drugs, pharma companies have a problem gaining trust 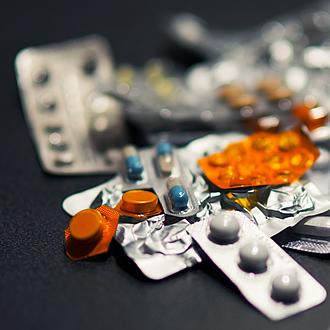 The pharma industry has a reputation problem. HCPs and patients can be brand loyal to the drugs they rely on and believe in, but suspicious ofâ€¨the companies behind the drugs. Multinational drug companies, while operating in complex legislative regions, are watched by the global media. Everyone gets to hear about supply, trial, and marketing poor practices from other countries; global reputation is affected by local performance.

The reputation of any company is created byâ€¨the users of its products and services, and also by non-users; in this 24-hour news world, everyone has an opinion. Drug companies have many stakeholders, but two groups have a lot of influence healthcare professionals and patients. People talk about brand choices as if theyre deeply personal we advise our friends about which medicine to try with undeserved gravitas and HCPs rely on colleagues guidance.

Since I was 19 Ive had ankylosing spondylitis – a chronic inflammatory disease. I wasnt diagnosed until I wasâ€¨30 but was told I had a bad back and told to take paracetamol. Even after diagnosis the stronger anti- inflammatories I received were ineffective. I often had flare-ups when I would be in a lot of pain and often had difficulty walking or doing much else. I was disillusioned with the healthcare service and the drug industry. When I was 35 I was prescribed a biologic treatment called an anti-TNF. It changed my life. And I mean those words.

My symptoms disappeared completely and have stayed away. I went from being weak, slow, drugged and in constant pain to being completely symptom-free. I am incredibly grateful for the drug company that brought this treatment to market. I believe in what they can do.

Every year I go for a routine check-up with the prescribing clinic to be prodded and poked and asked if the drug is still working. My recent meeting with the rheumatologist started in the usual way:

We went on to talk about how amazing the treatment was. He clearly had seen many others like me and was enthusiastic about its merits. Because I run a digital agency specialising in healthcare I always like to chat about the systems and applications they use in their clinic. The rheumatologist complained about how reliant they still were on paper-based data gathering to monitor patients and conduct clinical studies. He had however built an app for patients that was currently in use but he downplayed its success saying it was quite rudimentary and had a few bugs. The upshot was that there was little money available to digitise their data processes.

I suggested that he should approach drug companies for funding; his reply highlighted the mixed reputation of pharma companies: I really wouldnt want to do that. Well lose our perceived independence. Weve known some drug companies complain that the NHS is favouring one particular drug company over them. In some cases, they have been known to sue the NHS for this. And then theres the whole data privacy thing. We dont want to be seen to be giving patient data to the drug companies.

I was struck by what he had just said. Here was aâ€¨guy who two minutes previously had praised the treatment I was on and practically in the next breath was showing significant mistrust of the organisations who had brought that treatment to market. This polarised thinking underlines what a huge and complex task pharma faces in managing its reputation.

Being a multinational company working in the global market has benefits of course (beyond the benefitsâ€¨of scale). Gileads reputation is much enhanced by its sensitive pricing strategies that mean it sells HIV drugs in Africa at a suitable price to the local economy and J&J always respond to disasters around the world, sending kit to meet the needs of people affected.

These serious initiatives demonstrate responsible global citizenship. But how are such initiatives communicated? CSR (Corporate Social Responsibility) supports PR, but it isnt about PR. It certainly isnt about marketing. Getting the CSR message out is difficult and can even be met with cynicism by the public.

In recent years weve seen a lot of activity in the digital and social media space. Pharma companies have spent a lot of money on fancy websites, Facebook and Twitter campaigns aimed at enhancing reputation. A few have been very successful, theres no doubt. But companies have to be brutally honest with themselves. Many of these initiatives have missed the mark. The metrics many of them publically available as likes, comments, and views are mostly underwhelming. Just because the intention is good, and the creative idea is compelling, doesnt mean the campaign will be successful.

Looking at these campaigns, one thing jumps out: they are all dependent on creating a groundswell directly with the public, patients, or HCPs. This isâ€¨a really tough ask. Seeding a campaign directly to the public is very, very difficult if you are a drug company wanting to talk about a disease.

What very few companies have tried is building the digital groundswell amongst their own employeesâ€¨first and foremost. Its much easier for a company to reach its employees with a message than it is with the public. And surely employees are the best advocates? They are knowledgeable, they are (hopefully) engaged, they are more likely to be on-message. Whats more, when a company engages its employees to do good, they in turn feel good about their employer. This creates a virtuous circle, making them more likely to talk to others about their company, their work and their cause. And when an employee talks to a friend about their company in a positive light that message is heard and believed. This creates trust.

Putting CSR in the hands of employees may seem risky, but with clear goals and great co-ordination its really the most effective way to demonstrate authenticity. Digital technologies can mobilise great numbers of people when the cause is meaningful a genuine movementâ€¨is better than a campaign. Drug companies need to realise and release the power of employee advocacy, to demonstrate company values by responsible action.

And in time, I hope HCPs like my rheumatologist can trust the drug companies and not just the drugs. 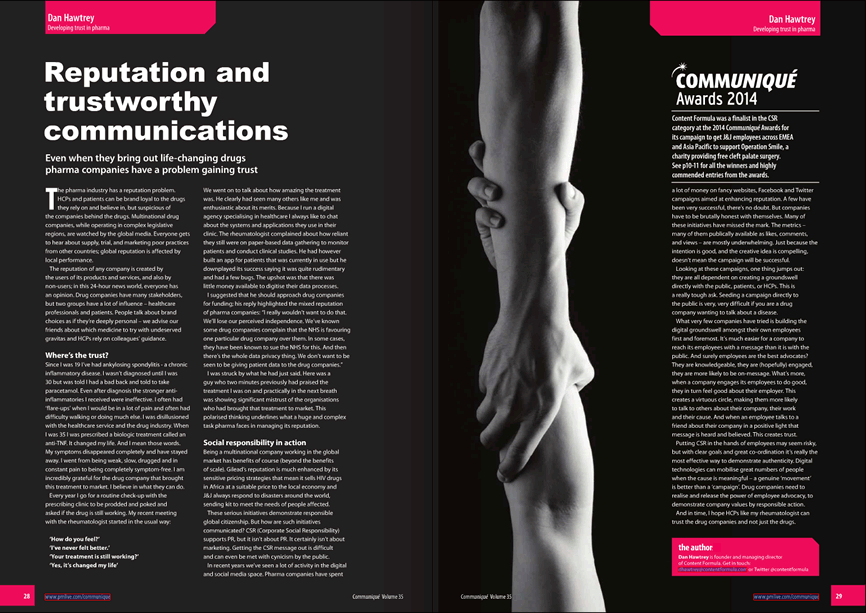