Microsoft has just announced a major addition to the Office 365 digital workplace. Its called Microsoft Teams. In a nutshell it provides a single place where teams can connect, chat, share and collaborate. Single place is the operative phrase here because to date team collaboration has often meant clicking from one tool to another in the Office 365 ecosystem. For example, your teams conversation might be scattered across Outlook, Yammer and Skype whilst your files and calendar are held in a teamsite. Teams brings everything together in once place. Except for, ahem, Yammer. Once again, ominous by its absence. The rumours of Yammer’s demise will continue.

Microsoft have not explicitly said that Yammer is going. But this is yet another signal that Yammer, acquired in 2012 for $1.2bn, is being sidelined. It has proven extremely difficult to drive serious adoption of Yammer as an ESN. Some companies seem to take to it like a duck to water and use it as a key way of team working and get great productivity benefits from it. But most struggle to get any serious usage bar one or two teams who use it religiously. However, there are a lot of companies out there who use Yammer for CEO and leadership comms. And I think this is how Microsoft is now positioning Yammer: it is for your broader, company-wide informal comms and YamJams. So no, I dont think Yammer is going to get killed off. Just repositioned somewhat. And people like me will probably now stop asking the awkward question, when is Microsoft going to integrate Yammer into the rest of Office 365?

But lets not focus on the bad news for Yammer. Microsoft Teams looks seriously cool. Here are some of the headlines:

Chat is a core feature

Within the Team workspace the core feature is persistent chat – a Yammer-like conversation that is searchable and means that new team members and people returning from holiday can catch up easily. It should help reduce email. Chats are threaded and can also be organised into channels. This means a team can have different topics of conversations – a channel is like a topic. You can see from the screenshot below that channels are clicked from the left hand nav. 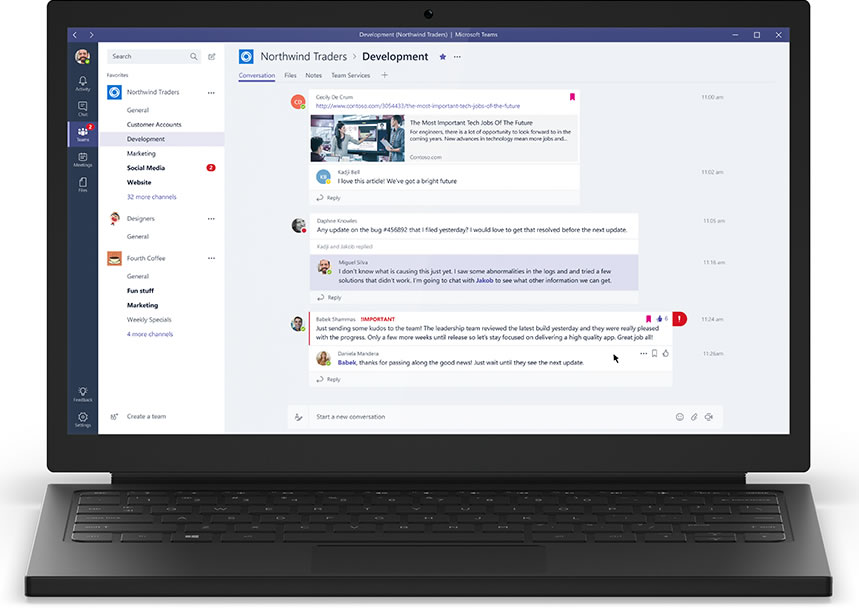 To make chats more fun and more like the real world outside the workspace, chatters can add Emojis, GIFs and memes to their conversations. For companies that consider themselves too grown up and serious for this there is the possibility to switch this off. 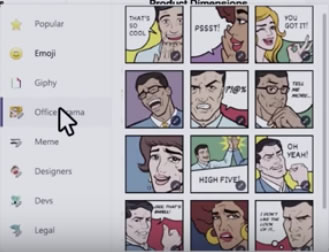 Bring in any content, data or tools with Tabs

Another core feature is the tabs that run across the top of the workspace. A tab can contain all sorts of different things. For example, as a team you might have an excel spreadsheet that is core to tracking your activity. You can set up this spreadsheet as a tab so you can all access it super-quick without having to leave the team workspace and faff around looking for the document, open it etc. As well as a specific Office document a tab could contain a calendar, a PowerBI dashboard, OneNote, a document library and more. Microsoft is also allowing you to create a tab that contains a view of data from a third-party tool (via an API connector). It probably get a little technical here but provided the connector exists (or you build it) you could for example show your sales pipeline from your CRM. 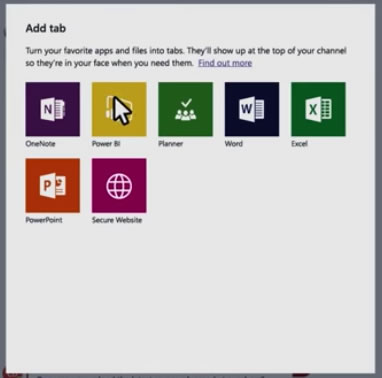 Teams also integrates seamlessly with Skype. If you want to set up a video call with your team you can do it quickly and easily without leaving the workspace.

Another feature I really like is the ability to have chat running alongside a document. This is a great way of collaborating on the creation of a document without the need to plaster it with comments and marked-up changes. Having said that, Microsoft have some serious work to do on real-time editing of a document. Team members need to be able to edit documents concurrently in real time from anywhere the world whilst seeing changes from other members appear instantly. If youve ever tried to use the browser-based view of a document in Office 365 youll know that its a pretty crappy experience and that Google Docs is way ahead on this. Come on Microsoft! 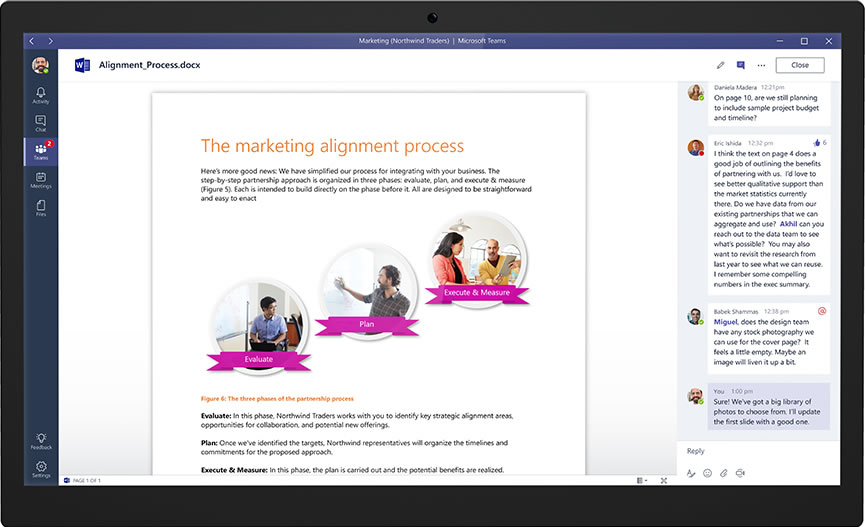 Membership of Teams is managed through Groups – what is now becoming the backbone of the Office 365 collaboration suite. Anyone can set up a group by simply going to the People directory in Office 365 (on the waffle menu). If you have a group, you can have a Team workspace. 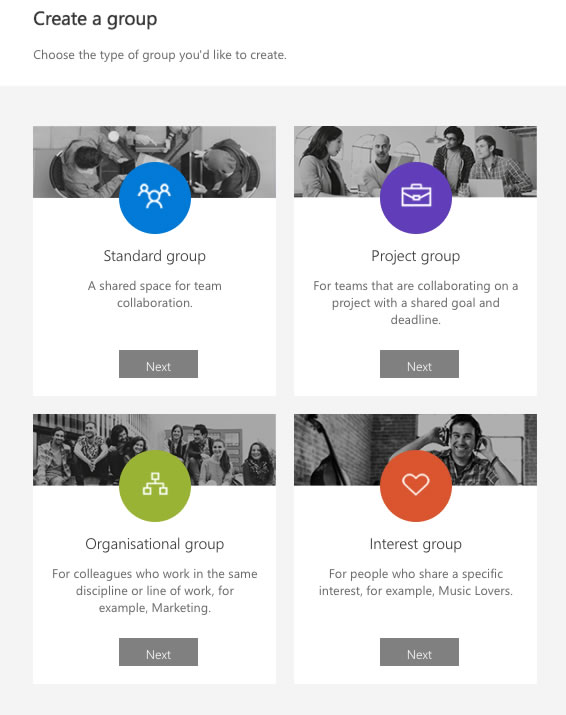 Its good to see that Microsoft has thought carefully about security and compliance when creating this new tool set. Data security on Office 365 is a major concern for companies. Microsoft Teams complies with all sorts of global and regional standards on data security.

When is Teams going live?

Microsoft Teams is available now to companies that have opted to preview new Office 365 tools and updates before their official release. Your Office 365 Admin can switch on Teams in the Office 365 admin centre > Settings > Services & Add Ins > Microsoft Teams. Otherwise it will be available to the rest of the world in Q1 2017. Once your admin has enabled Teams on your Office 365 tenant just point your browser to http://teams.microsoft.com. It will ‘connect’ with your O365 profile in the background. There are comprehensive training videos for admins and digital workplace professionals in the Microsoft Virtual Academy.

Whilst I kicked off this piece by talking about the demise of Yammer as a result of Microsoft Teams I think perhaps the real victim of all this could be Teamsites (which have themselves only recently been revamped). Its hard to see why youd opt for a Teamsite over a Team. But this raises another point. Whilst I love Teams I cant help feeling that things on Office 365 are starting to get really bloated, messy and complicated. There are so many moving parts, so many overlaps in functionality. Your average user is going to be hard pushed to know which tool to use when, where to find stuff and where to put stuff. Companies need to think hard about what features and tools to implement in their digital workplace so that tools designed for productivity dont end up having the exact opposite effect: at best people are going to be completely confused and frustrated about where stuff is or at worst they will reject these tools completely and fall back on good old email. That wouldnt be productive at all. IT will need to do their homework when it comes to adoption planning for Microsoft Teams. And migration. Ouch!