Its common to promise a new world when scoping the requirements for a new intranet. At the early stage, youre certain that the new platform with a new intranet user experience (UX) will deliver measurable business benefits in comparison to the old, clunky intranet.

Part of your role is to engage stakeholders, super-users, champions, and site / content owners in order to involve them in the redesign project, and in any content migration work. So you share the vision of the new world and persuade people that investment in the new system is an investment in their real work.

As the project gets underway, resources are tight but youre committed and you double your efforts as if the Emperor is about to personally visit your half-constructed Death Star.

Assuming you meet all the requirements (and scope creep is a constant threat), its a massive effort launch is your goal and its a relief to reach that goal. Buy the project team a round of drinks / boxes of cookies and actually get nine hours of sleep tonight.

But is launch so exciting for end-users, the colleagues the new intranet is supposed to serve?

If youre changing or upgrading platforms then 99% of the time youll end up doing a big bang launch. The new system has so many new features (and hopefully, benefits) so the change will be so obvious to everyone. Lets celebrate! 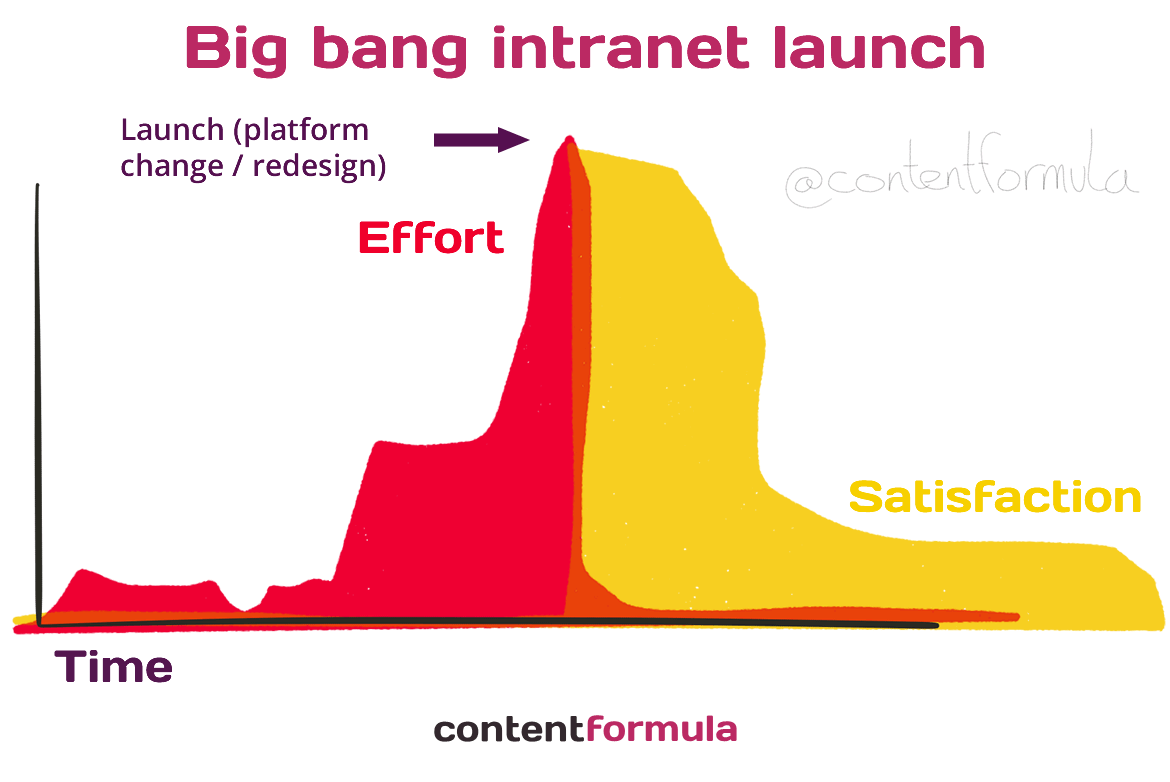 Sometimes, the launch communications are better executed than the training plan. Often, we expect people to choose to explore, when really, they just want to get on with their usual work and need the intranet to support their work.

It can be tempting to correlate the massive effort weve invested against the supposed benefits weve worked so hard, the thing must be good!

With the right user research and design testing (UX), you might indeed have the evidence to show that the new intranet more effectively supports people and their work.

But really, because levels of satisfaction, enthusiasm, even happiness, tend to return to their original average, in a matter of weeks or months your intranet will no longer be the new thing and no longer show increased usage stats. Basically, in a short while, people will forget just how bad the old intranet was, and no longer see the new intranet as a real improvement.

(And heres a thought; when do you turn the old intranet off? When content migration is complete? What if migration staggers on for seven months?)

Metrics might save you from negative judgements from your stakeholders. While employee satisfaction levels might fall over time, you might be able to prove that more tasks are being completed online than ever before, et cetera.

Yet, people will still report that the intranet doesnt quite meet their expectations; so what can be done?

Big bang launches can be exciting, but can also be overwhelming for people who just want to get on with their work and can no longer find the expense system or the proposal writing template.

Engagement activities, training, and time is needed in order to help everyone make best use of the new features and ways of working. Without this additional soft work (as opposed to all the IT work), people will revert to email and their C-drives instead of using the social and collaborative features of the new intranet.

The incremental improvement approach is all about drip-feeding new features to end-users and supporting their adoption. Instead of the intranet being an IT project, its an on-going business improvement programme, supported by L&D, IT, HR, Comms, the executive sponsor and the Steering Committee. 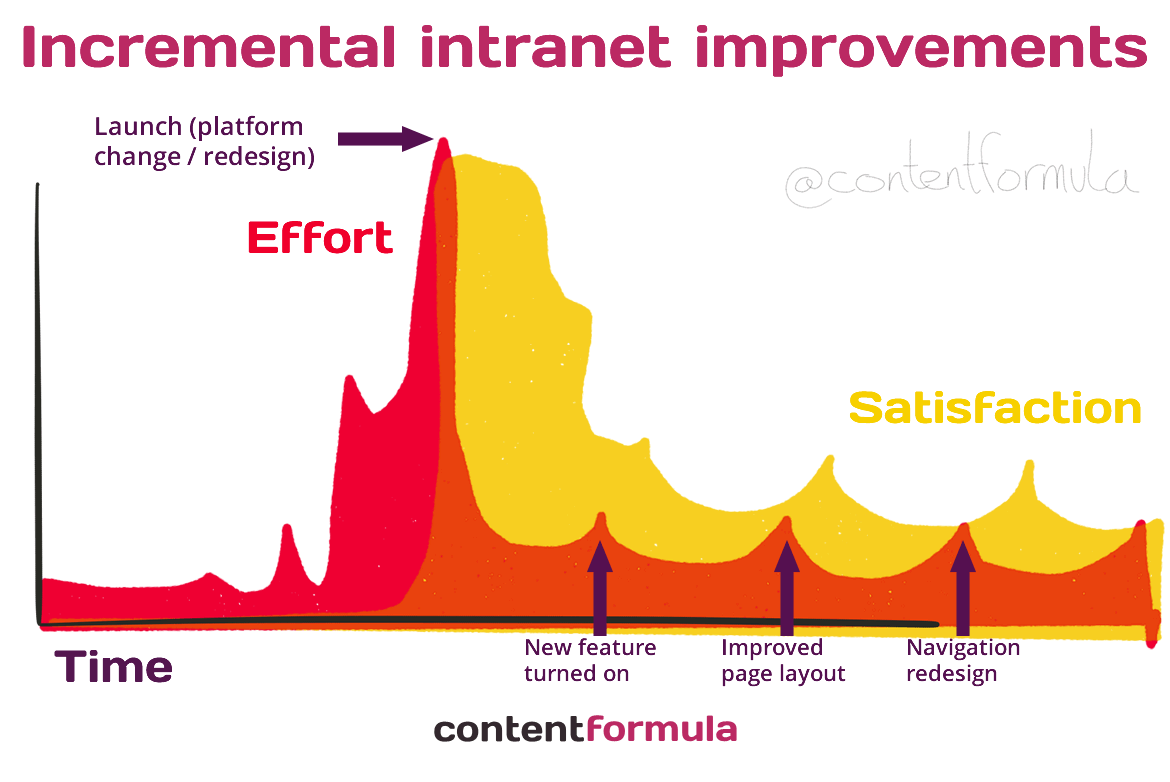 You dont even have to start with a massive design overhaul or a platform upgrade you can improve things from today.

Through the year, regularly, you might turn on new features that the platform offers, meaning that the intranet literally does more for people. The latest incarnation of SharePoint comes with all sorts of tools and functionalities that you might want to switch on gradually. This reduces how overwhelmed people might be with new features and new choices if you launch with every feature turned on.

Soon after, you might redesign the basic page layouts / page templates so that information is easier to read and ancillary reference materials (links, documents) are closer to hand.

Later, after copious user research, you will need to improve the main navigation menu, to better meet peoples expectations.

Many improvements will need research, so youre making evidence based decisions, and many will need accompanying soft work, such as contributor meetings and training. Some improvements wont need any technical changes at all such as reaffirming your intranet governance and engaging local department champions.

The point is that the effort (as shown in the sketch) is sustained over time. This is about intranet leadership not merely intranet management. Your sustained effort (and the resources that must support it) demonstrates your organisations commitment to its people and their work. And should create greater satisfaction.