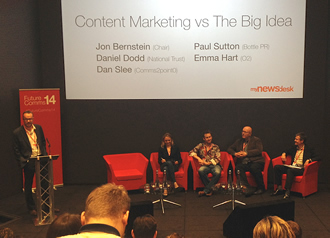 I feel ignorant for not knowing that it was Bill Gates who first said content is king back in 96. I know context, needs, and the appropriate channel are crucial, but conversations start with content, so I should have known where this maxim originated.

The Future Comms line-up provided many such insights, but the most striking theme was knocking brand engagement as an unethical intrusion, and a waste of time.

Considering that engagement has been perhaps the hottest topic inside the enterprise and outside in the marketing world, this is jarring.

At Content Formula, we dont see engagement as the end goal its either part of the journey towards happiness and productivity at work, or it’s part of the relationship companies build with customers.

But Tom Foremski felt engagement could be ethically dubious; I think Tom suggested that engagement activities took people away from time with their families! I interpret this as meaning that engagement for the sake of engagement is the criminal here.

Not everyone was so down on engagement, as O2 said:

Content marketing should be about engagement (with disruption), suggests @EmmaHart of O2. And massive customer service. #FutureComms14

But for hundreds of examples of engagement for engagements sake, see Condescending Corporate Brand Page on Facebook, which showcases awful uses of social media by companies that should know better. Some are so bad (especially the older ones) that you want to believe theyve been faked. Jon Morter (he who growth-hacked Facebook to make us all get Rage Against the Machine number 1 for Christmas in 2009) created the Page after Persils irrelevant engaging image and instructions, below.

Jon found, through years of feedback from consumers and agencies forced to push out this sort of thing, that people are happy to be sold things in their timelines, and find all this fluffy engagement stuff annoying.

And the point of @Corporate_Brand. Stop asking me to like the picture of your cupcake, just sell me your damn product. #futurecomms14

If those were the lessons, here are the actions

If were to build relationships, engagement will always be important. But we should stop thinking of engagement as a result or an activity that we put in front of people.

We, the communicators, change agents, PRs, and marketers need to be engaged in the story, in the relationship, in the process. We must be involved ourselves, as individuals and as organisations. We need to be authentically present, and committed to the purpose of our relationship building recognising the social contract between everyone involved in multi-way communications.

We cant churn content out without meeting a need or want. We have to add value, not just activities and noise, to peoples online lives.

A strategic marketing approach is needed so that we focus on the outcomes, not merely the inputs we create. Tom Foremski said it clearly when he suggested we need to shut up more.

More from the Future Comms conference: